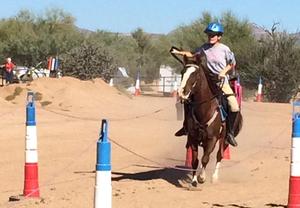 The San Juan Mounted Archers AKA “The Silver Horde” shoot arrows while riding on horseback.
It may seem like an easy task, to shoot at a target from atop a trotting horse, but it's not really that easy. The rider is riding with both hands occupied by bow and arrow and the horse must know what is expected of it, cannot get distracted or spooked.
Lauren Harwood, an SWCeSchool student, is a member of The Silver Horde, the San Juan Mounted Archers who participated in the Red, White and Blue Competition in Scottsdale, AZ last weekend. This was the groups second competition that they have competed in. This event was put on by the Desert Warriors of the Southwest and is one of the largest competition of it's kind in the United States. Lauren explains, "There are many types of mounted archery but the kind that we do is based on Mongolian mounted archery (a style of shooting that uses the thumb to pull back the bowstring rather than two or three fingers). You can do it at a walk, trot, and lope, but it is most commonly done at the lope. You shoot a bow off your horse as it is going down a 90-meter track that is roped off. As you ride you shoot at different targets that are on the track."
Harwood adds, "My horse's name is Oak and she is a 7 year old quarter horse mare. I have done the majority of all of her training. At this competition we are hoping to improve my shooting skills on horseback and continue to improve Oak's consistent Lope going down the track." No simple feat.
If you'd like to learn more about mounted archery you can visit the Mounted Archery Association of the Americas or to follow the San Juan Mounted Archers, aka: The Silver Hordes' progress you can find them here on facebook.
Print