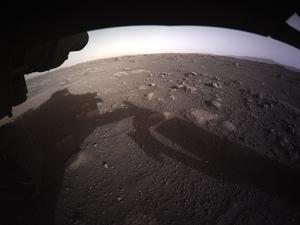 Hello Everyone! In this blog, I will be talking about some cool and interesting things that are happening with the Mars rover Perseverance! So if you are not familiar with the rover Perseverance don’t be ashamed. I didn’t know much about it either for some time. Previously NASA  has sent four rovers to Mars: Sojourner, Spirit and Opportunity, Curiosity, and Perseverance makes the fifth. What makes Perseverance different from the other rovers is that Perseverance can collect samples with its mechanical arm. It will drill a hole in Mars’s surface to collect a core sample of Mars rocks. One other key feature about Perseverance is that it has a drone on the bottom side that can fly out and get the first real footage of Perseverance roaming around on Mars. One of the reasons that NASA has the drone is to make transporting samples of dirt, rock, etc from site to site easier!

Recently NASA released the video of Perseverance landing on Mars on Youtube. I will link the video here, credits go to NASA. Some people are wondering how long it took to get to Mars and how many miles is it from earth to Mars? Well… It took about seven months to get to Mars but it only takes about 12 minutes for a signal to come back to Earth from Perseverance. It is about 292.5 Million Miles to Mars according to CNN news.

That’s all for this week. But, you will hear from me again next week!

This is the first photo that Perseverance took on Mars. Credits go to NASA.